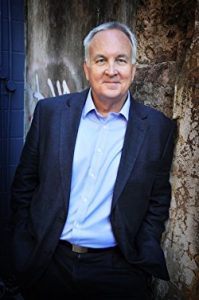 I attended a workshop presented by C T Mitchell on becoming an Amazon bestseller. His first image said – Australia hasn’t yet found its J K Rowling. Gold! Though we have many brilliant authors in Australia, he’s right. Our one who gets catapulted into the dizzying heights of worldwide fame of the Rowling variety is still yet to be decided. It’s an exciting proposition! Who will it be? Making it even more enticing, is Rowling’s humble beginning. She worked hard. She achieved it. It’s there for the taking for any Australian with the talent, work ethic and gravitas to keep knocking on doors.

Fascinated by the man who captured my attention so fully with his first sentence, I approached him for an interview. He was kind enough to agree.

How many books have you written?

I have published 22 mystery short reads and 1 thriller novel since March 2015; all located around Cabarita Beach and the Northern Rivers region, NSW, Australia.

How do you define success for an author? Are you successful?

Actually publishing a book. For me, I procrastinated for 20 years+ before I finally wrote a book and published it. Beating procrastination is success to me. I have been fortunate with some of my books hitting #1 Amazon US & UK in category. So yes I believe I have enjoyed some success.

How do you do research for your books?

Having been a visitor to Cabarita Beach for over 20 years, I continue to visit the area regularly and soak up its experiences. My books are not complex and therefore I don’t have to conduct in depth research. That may change as I further develop as a writer.

Do you have a favourite/s from the books you’ve written?

Murder Secret (previously published as Breaking Point) is my current favourite. It’s my first thriller novel as opposed to my mystery short reads. It has been well received achieving a 4.7 average review ranking. When writing it I only worked out the murderer in the very last chapter.

Dead Boss (previously published as Murder on the Beach) was my first #1 Amazon US & UK and is a favourite because it broke a barrier for me.

Initially I started early, 5.15am, and wrote for two hours. I’d then come back to writing at 8pm and finish around 9.30pm/10pm. Being a little older and not wanting to suffer the early morning cold, I now start writing at 7am. I write 4-5 times a week and work on book promotion mostly at night.

Do you believe in writer’s block?

I’m sure it occurs but I haven’t suffered it too much. Some days are better than others. Words flow freely and I can get my minimum requirement of 1000 words done quickly. If I’m chugging along and the words aren’t coming, I’ll change my circumstances by going for a walk, watching television or going out for coffee. If things still aren’t flowing, I pack it in and come back fresh next day.

Do your fans influence future works?

I have good engagement with my 5000+ reader group. We ‘talk’ weekly and they give me a few requests from time to time. Some want to see more of my cozy mysteries; others are Jack Creed diehard fans.

I once ran a competition for a fan to name the murder victim in my next thriller. I received over 150 names. Thankfully I drew a good one live on a YouTube video. Phew….

How do you come up with new ideas that haven’t been written before?

I participate in life. I actively listen to what is going on around me and adapt it for my books. My ideas aren’t original, just adaptions of life.

Dead Shot (previously published as Rejection) came to me while drinking coffee (I do that a lot) in a local shop. The news was on and America was going through another University shooting. An idea was born.

What are your tips for aspiring authors in terms of character development?

As I mentioned before, I’m not the most descriptive writer. Short stories tend to move quicker and character descriptions tend to be minimal. However as I move towards longer writing, I’m working on developing my characters more.

Reading other authors’ works helps build character definition. I also like the teachings of K M Weiland – her books on writing are great as is her blog www.helpingwritersbecomeauthors.com

What’s your background, how did you become a crime writer?

I’m a former real estate agent who met a lot of criminals; some in the legal fraternity. It developed my interest in crime and pushed me toward crime writers like Agatha Christie, James Patterson and Peter James.

What are you working on now?

I’m close to finalising a publisher agreement with an Indian digital distribution group. They need 25 books from me; so two to go.

What does the future look like for C T Mitchell?

Positive. I started writing because I wanted to become a full-time author. I secured a UK publisher in April 2017 and we are working together on getting a book done to be distributed to bookstores in the UK, US and Australia.

This publishing deal helped me get accepted into the Crime Writers Association (UK) – home of the Dagger Awards (the Oscar’s for crime writers). I want one!

My pen name is a compilation of my three children’s names. My books are my legacy to them.

Carolyn Martinez is an author, editor and author’s coach, and the Founder of Brisbane Book Authors – a non-profit, social networking group for published authors.